blah blah blah. We all know, or should know, that backups are important.

As I mentioned in my first post about backups, they are important. I could link to so many statistics about lost data here... but then I would need to vet their legitimacy. *wink*

Again, as I mentioned last time:

There are a Lot of Options out there. A lot of them don't do what I want. There are a few criteria that I desire, deltas, encrypted transfer, encrypted storage, space conservation, remote backup. There are few programs that did these, and did them in a way I liked.

Last time I talked about rsnapshot and obnam. After close to a year of using my cryptshotr (a fork of cryptshot), a rsnapshot wrapper, I have learned more about what I want. I have also gotten myself a shiny NAS recently.

I got a QNAP TS-453A recently, and put four 4TB WesternDigital Red Drives in it. Sadly, one drive was dead on arrival, and I had to go through warranty.

After getting the replacement drive, I now have a RAID6 with ~7.1TB of usable space! (About two terabytes were immediately filled with content)

Having gotten this nice, big, directly networked, high network speed/disk speed beast, I decided it was time to relook at my backups.

My rsnapshot based backups have worked, and were reliable, but had two 'issues'. They where slower than I would like. An incremental backup would take about 15-20 minutes. And they use an encrypted LUKS+dmcrypt, which isn't going to fly with my NAS.

Now, I'm sure that a big part of the time sink was needing to decrypt/mount the USB 3 external for every backup. (And the pi3 only has so much CPU...)

But to be honest, cryptshotr is also a bit Rube Goldberg-esk. 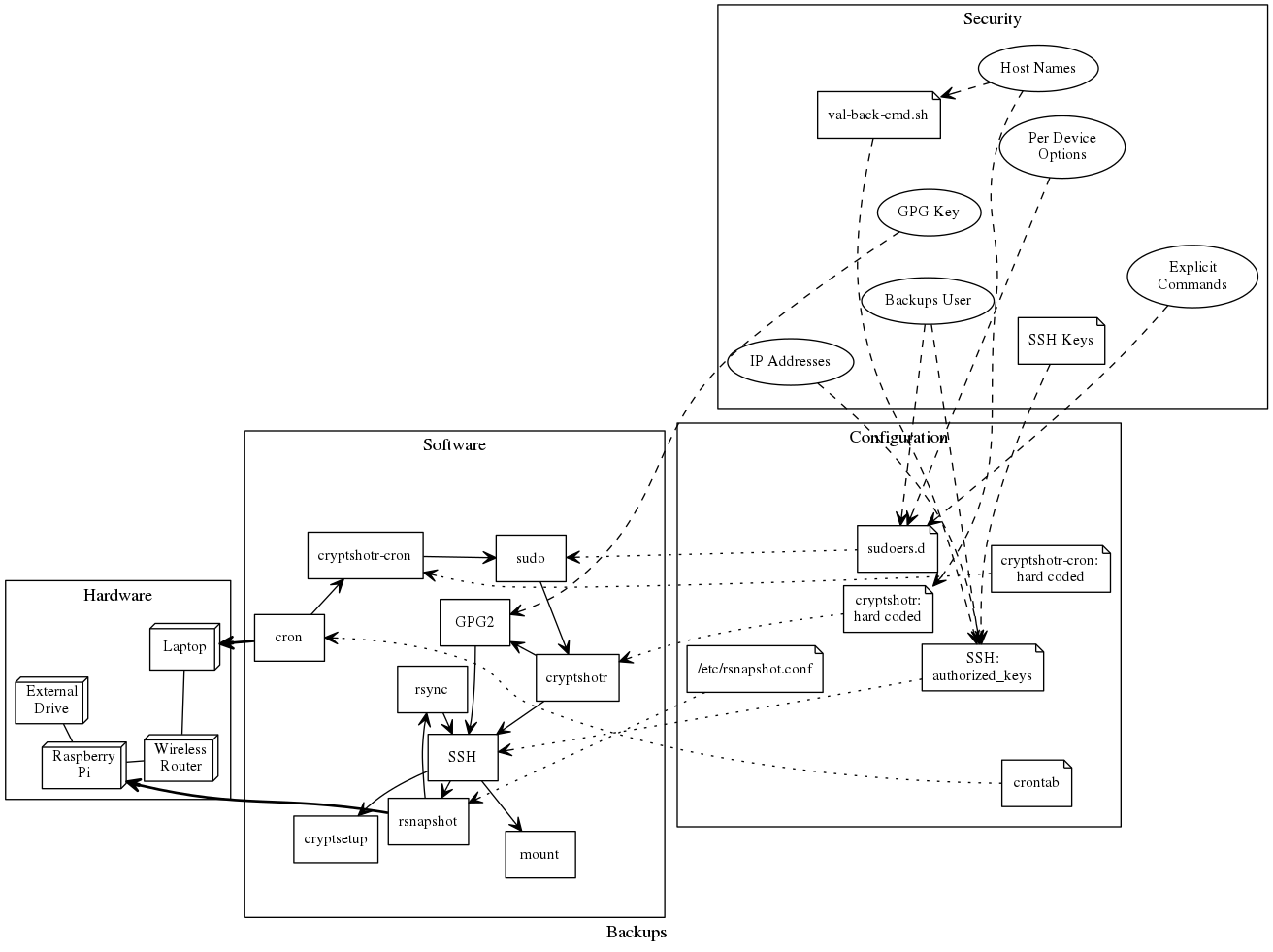 After yet another round of backup option research, Attic was looking like a decent option.

However when I went to install in on debian sid, I found it was no longer in the repo. With a bit more digging, I notices it was looking a bit stale. While looking at the git issues, I noticed ThomasWaldmann referencing issues to BorgBackup, so I gave it a peek.

What are the differences between Attic and Borg?

Borg is a fork of Attic and maintained by “The Borg collective”.

Usage is pretty simple. To initialize a backup location borg init /path/to/repo and to make a backup borg create /path/to/repo::archive_name_x ~/one ~/two. Then you can start dropping options on top of that.

Initially I was pointing my backups at an AutoFS local CIFS mount, which worked quite well. *skims past* After getting everything working and automated (more on that later), I decided to switch over to the ssh connection type so I could start backing up my VPS too.(Since... uh... I'm not going to be doing a CIFS mount over the Internet)

I should also note that incremental updates are only taking one to three minutes now!!! (with ~45gb of space that borg is paying attention to).

This proved to be a big of a chore. With my QNAP I have a third party package called Entware-ng install, which provides the opkg package manager from OpenWRT (and I have used on my router). This is a handy way to get various linux packages onto the NAS, like my deluged. Unfortunately borg wasn't an offered package. The precompiled binaries also have issues.

This seemed pretty easy. Install the app called 'Container Station', and wait for it to install itself and its dependency apps. Then make a container of your chosen linux distro (please don't say 'ubuntu'...). I choose a debian lxc (which I promptly upgraded to debian sid). During the setup process, select 'Advanced Settings>>>', set up the Port Forwarding, and the Shared Folders. (I didn't do this the first time round...)

So... about Port Forwarding... The UI only lets you edit it during container creation...

At this point I start using my GoogleFu, and see that a few people have posted about this over the past couple of years... with no solutions known.

Oooo the bug gets funner! After restarting my container, the Port Forward vanished!

After making a through away container, I find a good one should look like:

Which is now posted on the QNAP forum as well.

Here is a summary of how I tied everything together.

I wrote up a nice little script to handle my backups.

Users? We don't need this section! Well, aside from a normal account on the destination with access to the backup destination.

Compared to my old cryptshotr it is very simple and concise.

I have borg_wrap.sh called every hour, and unlike my old cryptshotr I don't bother with fancy time checks as I don't need to balance/track multiple periodicities.

Note: Aside from how often you run backups, periodicities are partially a function of how you prune.

While I have not accumulated enough backups to use this yet, this is close to what I will be using:

As a finishing touch, I updated my back_log_backups.conkyrc to use my borg_wrap.sh log, stored at $HOME/.config/borg/log. This will show the last six entries, and if none six are a 'passed' it will show a seventh line at the top, showing the last 'passed' entry.

So, as you can see, my setup is much more simplified now: 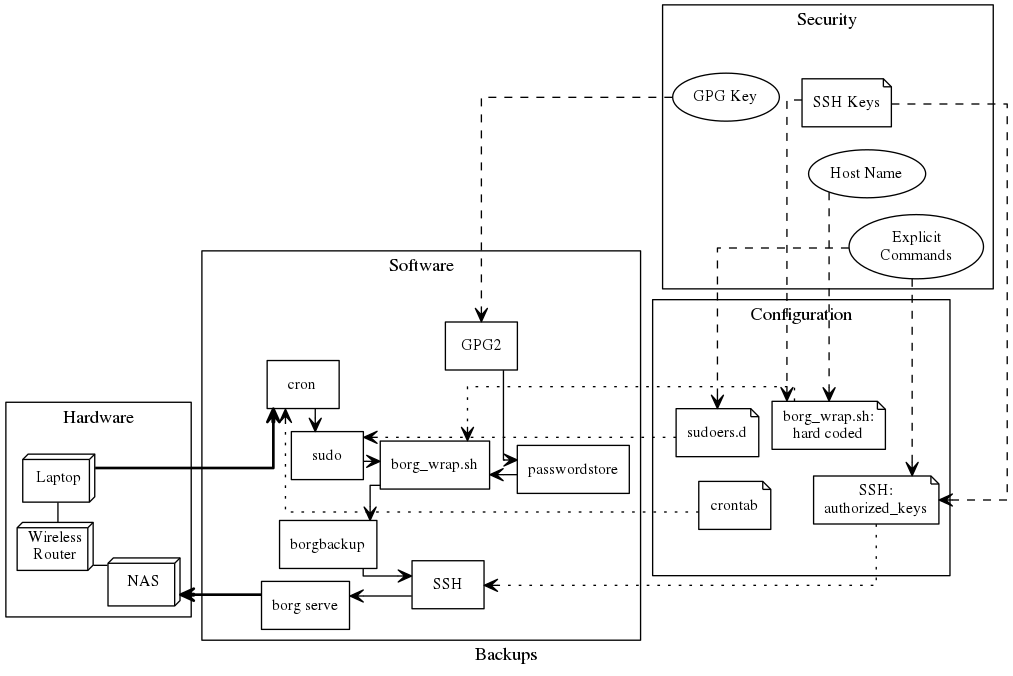 Having done all the leg work for my laptop, it was easy to add another repo/authorized_key for my VPS and just tweak the script (and disable the wifi MAC address lookup). So now I have both my laptop and my VPS backed up on my NAS.